Gentleman Toker takes a long walk to his sofa to watch Stranger Things while trying out medicated edibles from Kazooted.!

The following is an article produced by a contributing author. Growers Network does not endorse nor evaluate the claims of our contributors, nor do they influence our editorial process. Any opinions expressed in this article do not reflect the opinions of Growers Network. We thank our contributors for their time and effort so we can continue our exclusive Growers Spotlight service.

This article has been republished with permission from Gentleman Toker. The original article may be found here.

If you’ve been around the DC marijuana event scene long, you already know Kazooted. Their passion has made them one of the city’s more distinguished edible brands. Their signature truffles are exquisitely artisanal, more like tiny globes depicting the glory of Earth’s Chocolate Age than some mere sweetie. Appropriately, they come in these elegant but simple two-pack boxes that list the main ingredients, strain they are infused with, and the potency — 60mg per truffle. They also note that the distillate used to craft these candies hails from Riki Tiki Extracts. The Gentleman could sit and marvel at these beauties, or he could check how well the meds work and watch Stranger Things’ sequel. Down the hatch!

Stranger Things 2 was awesome, by the way. They do an amazing job of evoking everything that was great and wondrous and epic about movies in the 80s, back before Hollywood ran out of ideas and sequeled or relaunched everything they had already done; before Hollywood realized that comic books were an untapped resource, thus creating the current deluge of comic-based movies. It wasn’t quite as Damn, Daniel as the first season, but it holds its own. Plus did you catch the shout out to King Mob when Eleven is introduced to the Warehouse Crew? I yelped with nerdish glee to see Morrison’s The Invisibles get a nod, because that super-weird mindfuck graphic novel is never going to see a faithful screen adaptation of the source material. Ok, it could be that my enthusiasm was a byproduct of the six Kazooted Infused Truffles I ate first. 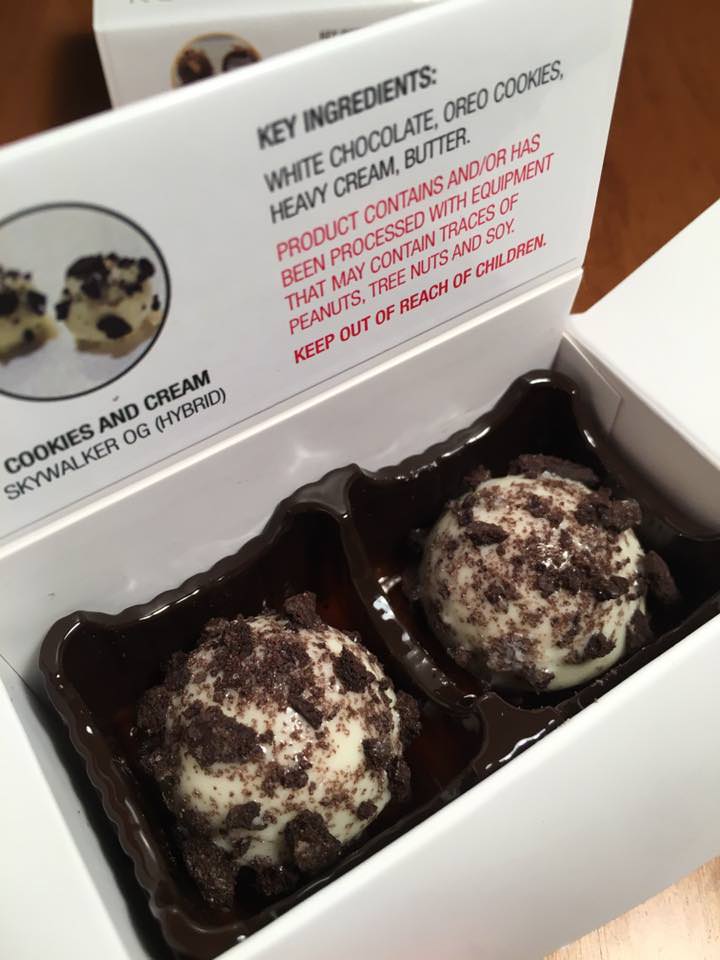 I think you’d need a food critic to properly elucidate the incredible combinations of flavors Kazooted employs in these truffles, but a Gentleman shall try. What struck me most about each truffle was the subtlety of sweetness which never overwhelmed the taste buds, each element in perfect balance. The S’mores were my favorite, milk chocolate and graham crackers over the fluffiest marshmallow ganache, but the Cookies’n’Cream was also my favorite, and yes I’m allowed to have two favorites. The caramel inside the Chocolate Almond Brittle was sublime, enough to make me forget that I don’t care for almonds or brittle. And in just 12 bites, I had taken in 360mg of cannabis. 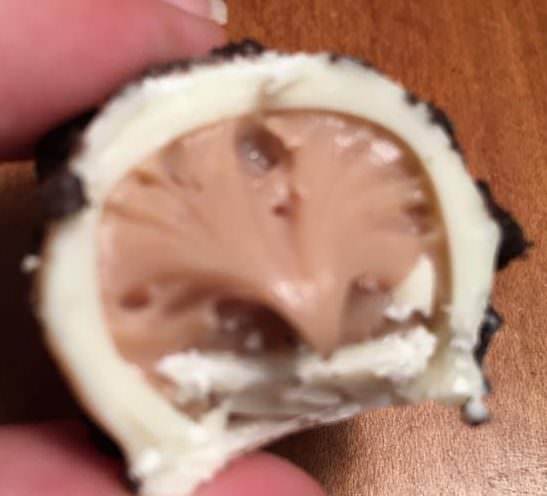 I briefly considered taking fewer, as both Cookies’n’Cream & Chocolate Almond Brittle were made with Skywalker OG, but S’mores were made with Girl Scout Cookies. Since I’m always going on about my tolerance, though, why not push it a bit? Both are listed as hybrids. So many folks are growing GSC that I’ve had results all up & down the line, but Skywalker OG has definitely hit me with couch-lock in the past. Surprise, this is what happened when I ate all of Kazooted’s truffles. It took 70 minutes for them to kick in. The bright, relaxed mood quickly gave way to the heavy body stone and only the lure of resolving cliffhanger endings gave me the will to charge on after that. I made it to the beginning of episode three before slumping off to bed. 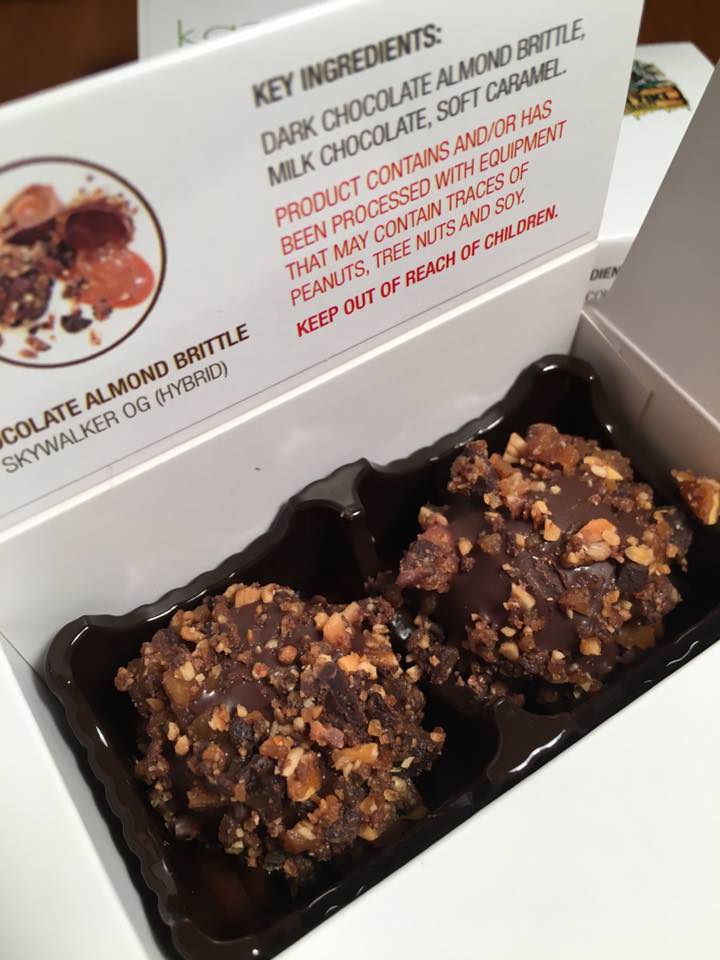 But that’s not the end of our story! No, I woke up two hours later, craving sugar. Hunger bested inertia, so I got up and had some Fudgey Grahams with a couple swigs of Coke then went back to bed. Five hours later, when I awoke, I was still significantly stoned. I took a couple hits off the bowl and couldn’t even finish it til I returned from my walk, but I’d say it was around six in the evening before the effects of eating six Kazooted infused truffles in one go completely evaporated. 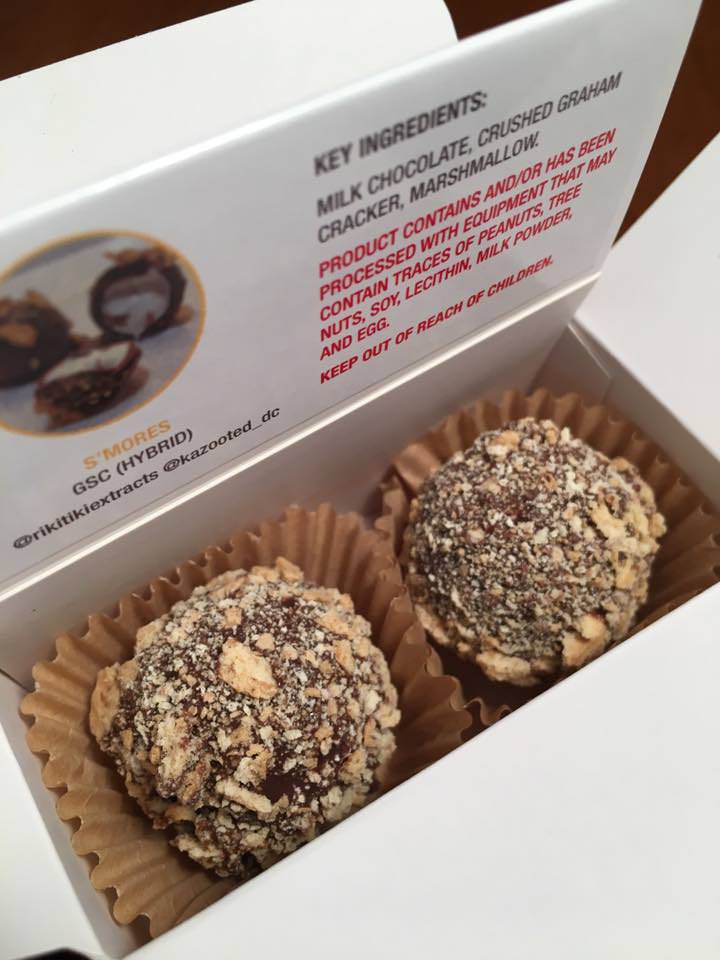 The Gentleman is quite pleased to find another potent edible to recommend to you, my obsequious, orange octopi, let alone one as professionally prepared as Kazooted. These infused truffles are just as suited to your fancy, Deep State bunker parties as they are a satisfying reward in the bubble bath after yet another successful, but always so messy blood-orgy dedicated to your ancient death god. If you want to find out where you can get Kazooted, hit ’em up on Facebook or you can Follow them on Instagram! While novices should go with a much, much lower dose than your favorite psychonaut, they’re so delicious I think I’m gonna have to clear my schedule, eat a baker’s dozen and, presumably, get very, very weird with it.

Want to get in touch with Gentleman Toker? They can be reached via the following methods:

Joseph Tierney is an independent, award-winning cannabis blogger based in Washington, DC. Well, OK, the awards are hypothetical at this point because there aren’t any for horror/comedy/scifi-based internet rants from a dabbed-out misanthrope, but if there were, GentlemanToker.com would win them all. But, like, probably not, cuz politics. Right? You feel me.