In the third article of this series, Marco Troiani of Digamma Consulting analyzes how the human body is affected by cannabinoids. If you would like to read the previous article, please click here!

To get a good picture of the differences in effects between inhaled and orally-ingested cannabinoids, it is useful to monitor cannabinoid and metabolite concentrations in the blood of a patient over time. Oral ingestion of cannabis leads to higher levels of OH-THC found in the blood instead of the much lower levels of OH-THC found following inhalation. We first examine blood serum levels after inhalation in figure 6.

Figure 6: This graph illustrates the amount of THC and two primary metabolites in a patient's blood over time during inhalation.

We can see that immediately after smoking, the patient has the highest THC levels and very few metabolites. As time elapses, the body converts THC to OH-THC gradually, and THC levels begin to fall. A small amount of OH-THC accumulates in the blood. After sufficient time passes, the THC and OH-THC are fully converted into the inactive COOH-THC which becomes the predominant metabolite in the patient's blood.

Notice the very low levels OH-THC relative to THC. Only a small portion of blood exposed to THC is sent to the liver, resulting in the body converting THC to OH-THC very slowly. This leads to lower blood serum levels of OH-THC following inhalation. OH-THC peaks around the time that THC levels begin to decline. This pattern coincides with the cessation of initial symptoms of cannabinoid intoxication; in colloquial terms, this is the end of the “high” and the beginning of a “burn out” or “coming down” phase. The onset of these delayed symptoms, or “after effects” coincide with a OH-THC blood serum peak, which strongly implies that OH-THC plays a role in this phenomenon.

Now that we are familiar with the general pattern of THC/metabolite concentrations in blood after inhalation, we can examine empirical evidence from a published study, conducted by Huestis et al in 20095, from which figure 7 is taken. 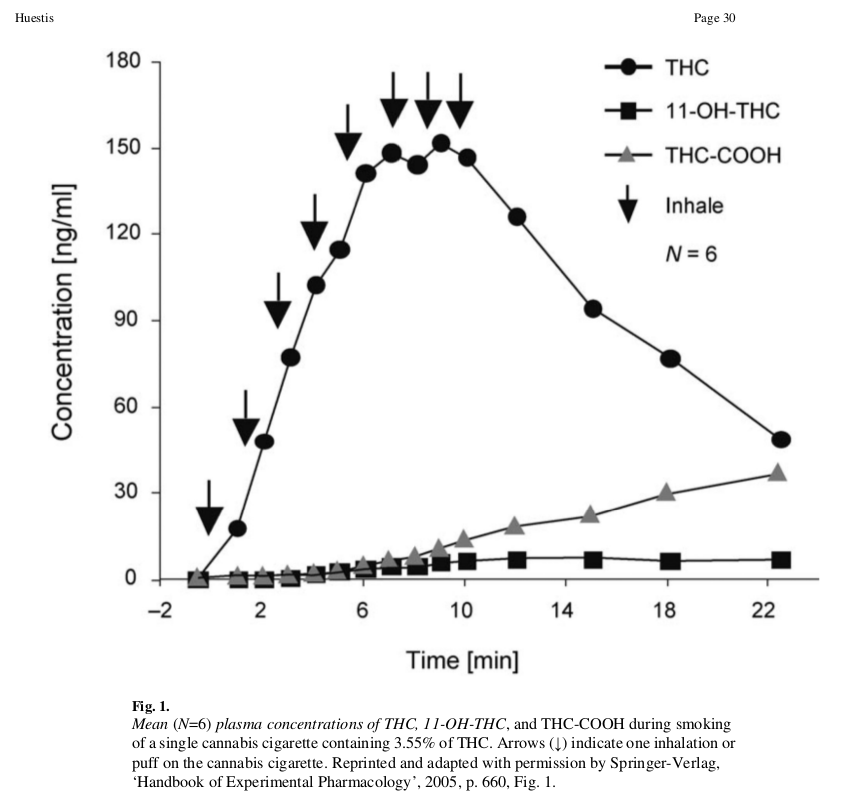 Because this is an experimental study, researchers first had to document blood levels before the introduction of any cannabinoids. Ten minutes after first inhalation, the graph mirrors figure 6, with decreasing THC levels, increasing COOH-THC levels, and a small bump of OH-THC in between the two.

The next scenario examines the oral ingestion of cannabinoids and how the resulting blood serum levels of THC, OH-THC, and COOH-THC change over time. Feel free to revisit our first article to review anatomical path of orally-ingested cannabinoids.

Figure 8: This graph illustrates the amount of THC and two primary metabolites in a patient's blood over time during ingestion.

In figure 8, at time=0, we see that the patient’s blood serum contains THC and OH-THC at approximately equal levels. THC must pass through the liver before reaching the brain, accounting for the high levels of OH-THC. However, some THC passes through the liver without being metabolized. For this reason, we do not see a complete absence of THC in the patient's blood.

As time progresses, THC continues its conversion into OH-THC, leading to an increased accumulation of OH-THC in the blood. As time passes though, all active THC metabolites are eventually converted to COOH-THC and rendered inactive. If OH-THC is higher potency than THC, it is clear how small doses of ingested THC have strong effects on patients relative to the same dose of inhaled THC.

Now that we are familiar with ingested cannabinoid pharmacokinetics, let’s examine the empirical data from Huestis5. 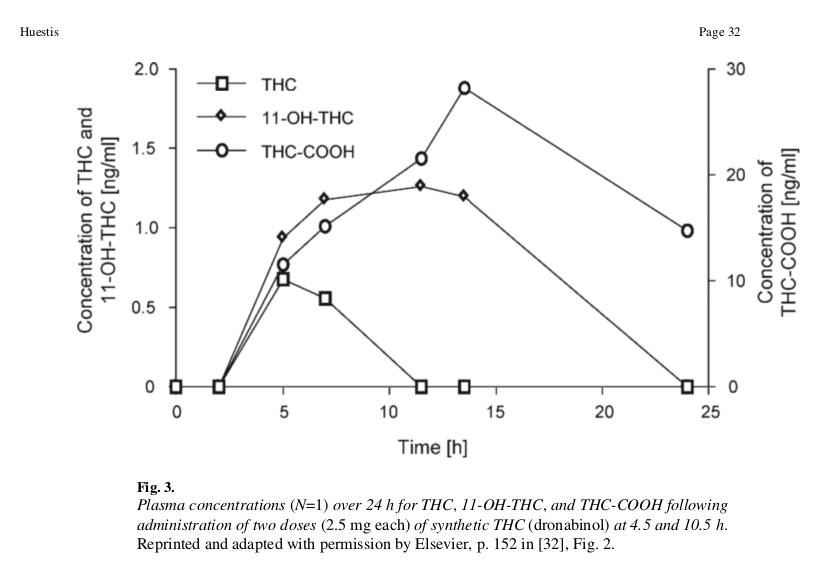 At beginning of the experiment, absorption rates in the blood are high, with OH-THC absorbing at slightly higher levels than THC. Between 5 and 15 hours, THC levels fall off while OH-THC continues to accumulate from THC metabolism. Around 15-25 hours, OH-THC levels fall to zero as it converts into COOH-THC, which also begins to decrease.

The scale covered in this experiment is between 0-2 parts per billion (ppb) in the blood. The concentration of THC-COOH was the only cannabinoid that exceeded 30 ppb. The previous experiment on inhalation was done over a much shorter time interval (minutes), but displayed concentrations ranging from 0-150 ppb. The difference in scales supports the hypothesis that OH-THC has increased potency over THC. However, further studies are needed to validate this hypothesis.

One important factor for patients who choose oral ingestion is the decarboxylation of THCA into THC. THCA does not have the psychoactive properties of THC, but it provides medical benefits that THC does not, such as anti-inflammatory effects (via inhibition of inflammatory cyclooxygenase (COX-1 and -2) enzymes)6. This distinction is less important for patients who choose inhalation, because the the process of smoking or vaporizing THCA automatically decarboxylates it into THC. An open flame (>300 C or >500F) or red hot nail (approximately 400 C or 750 F) will convert THCA to THC, as will an oven at baking temperature (approximately 177 C or 350 F) with 30-70% efficiency7.

THCA can be decarboxylated with relatively gentle heat outside the body, but once THCA enters the body it follows a different metabolic pathway than THC, and leads to no psychoactive effects. Studies have shown that it is not possible to decarboxylate THCA to THC in vivo8. Once THCA is introduced to the body, it is metabolized and excreted by the body as a metabolite of THCA, not THC or any of its metabolites. The following diagram, figure 10, outlines the relationship between THC and THCA as metabolites in the human body. 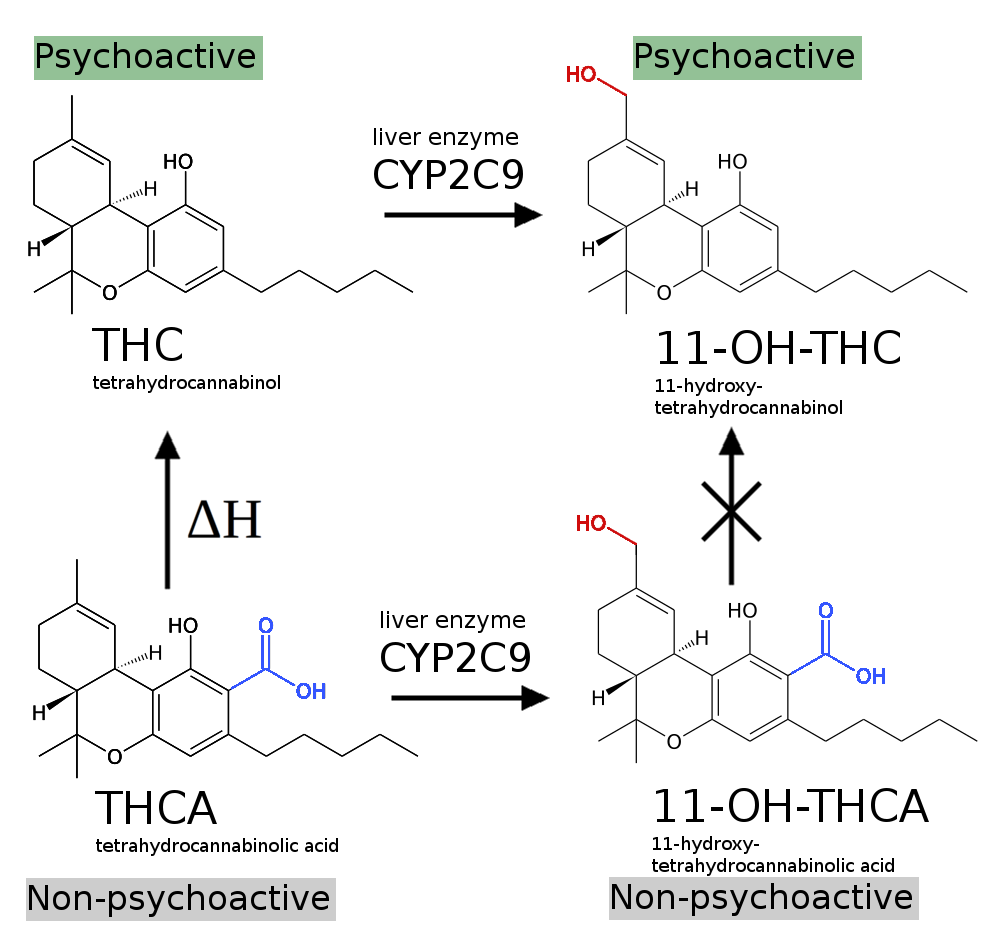 Figure 10: If THCA is not decarboxylated, it remains non-psychoactive throughout metabolism. The blue carboxylic acid (COOH) group remains attached to both THCA and its metabolite.

It is important for patients to understand their specific needs from cannabis therapy. If a patient chooses to ingest edible cannabis for their psychoactive effects, it is important that they read the lab testing results of any products they purchase in a dispensary. They should examine the levels of THC, THCA, and other cannabinoids that are relevant to their health. In general, patients looking for psychoactive effects should seek out products with high THC levels and almost no THCA. Conversely, a patient who does not desire the psychoactive effects from cannabis but instead seeks treatment for an inflammation-based or autoimmune-based dysfunction will need to orally ingest THCA, since absorption of THCA through inhalation is not known to be possible. The patient will want to check lab results for products purchased at dispensaries to make sure the level of THC present is low enough to be acceptable, and the level of THCA is adequate.

A firm grasp of the science behind cannabinoids and their interactions with the body can help a medical patient, prescribing doctor, or industry professional understand the effects that different routes of administration will have on health, function, and experience. As accidental oral ingestion “overdoses” become more frequent in recreational states, it is important for a patient or recreational user to be aware of how this route of administration will affect their body and mind.

Author’s Note: The term “overdose” appears in quotes because cannabinoids can cause a mentally unpleasant state, but have no known lethal dose associated with them.

As the cannabis industry becomes more aware of the chemistry of both the plant and biochemistry of the human body, it will be better able to serve, and more importantly meet, the needs of all patients and users.