Lighting and Lighting Controls in a Greenhouse – Part 1

This educational text from Argus Controls’ highlights how lighting considerations in greenhouse design play an important role in the cultivation of any crop, including cannabis. The text has been split into several sections to make for easier reading, although you can see the original on Argus’ website.

This article was originally written and published by Argus Control Systems Ltd. The original article can be found here.

It all begins with light.

The job of a greenhouse is to provide a structure for growing plants that is transparent to sunlight, yet sufficiently enclosed to reduce convective heat loss (the exchange of air between inside and outside). Some of the solar radiation traveling through the covering material produces heat, and some of it is used for plant photosynthesis, resulting in the production of useful biomass.

Light is a form of electromagnetic radiation that is visible to the human eye.

The radiation that we perceive as sunlight, or the visible spectrum, is a small fraction of the total electromagnetic spectrum that includes gamma rays, x-rays, and radio waves. Violet colored light rays at about 380 nm (nanometers) are the shortest wavelengths that humans can perceive in appreciable amounts, and red light wavelengths at about 720 nm are the longest.

Solar radiation consists of a vast spectrum of electromagnetic wavelengths at various intensities. Visible light from the sun appears white due to the mixing of wavelengths that our eyes perceive. However, when passed through a prism or a mist of water droplets in the air, light waves become organized or refracted into visible bands of color producing a rainbow effect. 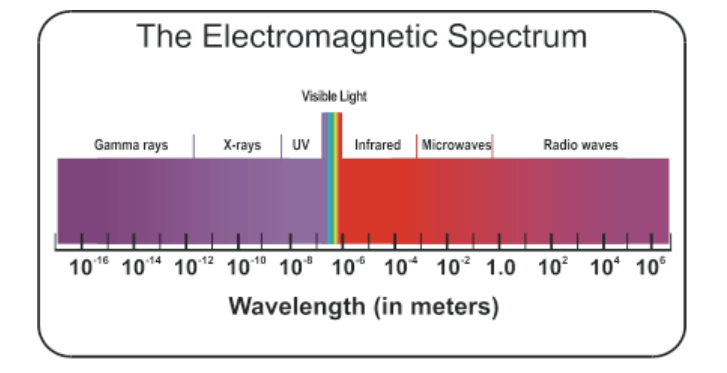 Since human eyes can only perceive a small part of the total emission spectrum, we are largely unaware that objects all around us are continually emitting radiation. As the temperature of an object increases, the spectrum of radiation emitted by it shifts to include shorter wavelengths. Eventually, when sufficient temperatures are achieved, we perceive a ‘glow’ as the emitted radiation shifts into the visible range.

How Does Light Affect Plant Growth?

It’s important to remember that humans perceive light differently than plants. We have the strongest response to light in the green/yellow part of the spectrum (about 600nm).

For photosynthesis, plants respond strongest to blue and red light, and to red and infrared light wavelengths for photoperiod growth responses and germination control. The intensity, duration, direction, and spectral quality of light radiation that plants receive has an effect on photosynthesis, flowering, climate response (temperature and water loss), and plant shape (photomorphogenesis). 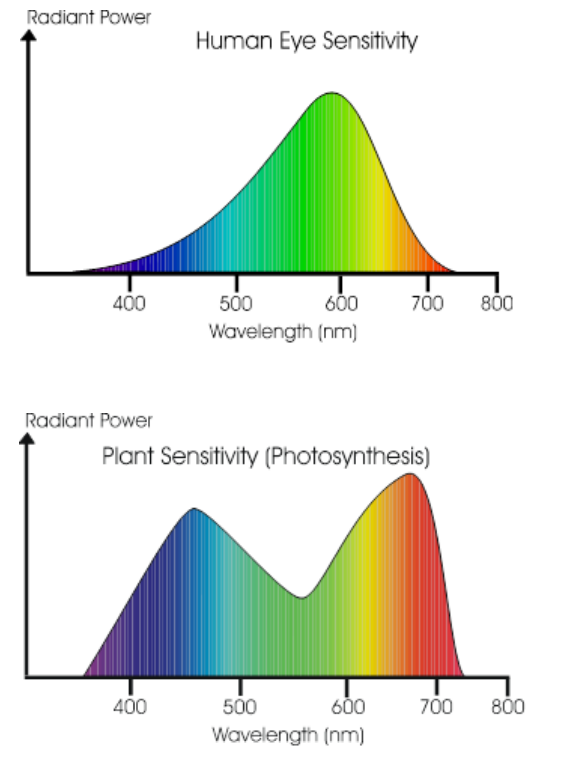 To humans, plants appear largely immobile. Therefore, we tend to regard them as passive organisms, at the mercy of their environment. They are in fact, very active and adaptive in their response to their environment and environmental change.

Since natural sunlight is a highly variable phenomenon, plants have evolved mechanisms to measure and cope with the various fluxes and cycles in natural light characteristics. In response to light conditions, they can control their rate of evapotranspiration and water uptake, their internode length, their leaf size, count, orientation, and chloroplast density, as well as determine the optimum timing for flowering and other physiological processes.

They can also determine the direction of light, and are able to orient their leaves and growth habit to take optimum advantage of the sun angle. Some seeds require specific light conditions to break dormancy (photodormancy) and germinate.

Greenhouse raised plants often look quite different from genetically identical outdoor specimens. This is due in part to their response to climate differences, including the quantity, quality, and duration of light they receive.

Within the chloroplasts of plant cells, light energy is used to convert atmospheric carbon into carbohydrates in a process called photosynthesis. It takes surprisingly little sunlight, about 80 – 110 watts per square meter to achieve full photosynthetic output on a typical leaf surface in direct light.

However, since most growing plants consist of a canopy of leaves in which some of the uppermost ones receive full sun and the rest receive a mixture of direct and reflected light, higher light intensities (often in excess of 500 watts per square meter) help to ensure that all leaves approach their maximum photosynthetic potential.

Less that 5% of the total sunlight energy that a plant receives is used for photosynthesis. For example, most plant leaves appear to be green since they only absorb up to 60% of spectral green light.

Under full sunlight conditions, this unused radiation tends to generate potentially damaging heat at the leaf surface. Luckily, plants have a number of strategies for this. They are capable of dissipating heat by several means, including reflection, transmission, convection, radiation, and evaporation.

Of these methods, evaporation is the most effective and elegant. Up to 90% of the available sunlight energy is used for evaporation. By evaporating water from their leaves, plants accomplish two things.

First, the process of evaporation cools sun-heated surfaces, and second, the upward movement of water needed to replace the water lost through evapotranspiration provides the means of transport for dissolved nutrients entering the plant by way of the roots.

As a rule, the greater the radiation level, the greater the rate of evaporation, although the vapor pressure deficit (humidity level of the air relative to the plant surface) has a contributing effect. However, there is a point under high light conditions, when the plant must evaporate more than it can physically extract from the soil and transport to the leaves.

Faced with a potential loss of cell (turgor) pressure the plant must close or partially close its stoma to conserve water and prevent wilting. This effectively shuts off the flow of carbon dioxide and the assembly line of photosynthesis slows down. Beyond this point, increases in light levels and the resulting increase in leaf temperatures can further decrease or stop photosynthetic output, and, if wilting occurs, permanent damage to plant tissues may result.

It is interesting to note that over time, plants can increase their capacity to cope with light related heat stress. They can produce more roots to better extract water for transpiration, and the leaves can change physiologically in their tolerance to strong sunlight. In greenhouses, we often witness this in spring crops, or propagated cuttings raised under low light levels.

During the first few days of bright sunshine, crops may wilt, or sustain sunscald injury before they can acclimatize to higher light levels.

Plants are capable of detecting more than just the intensity of incoming light. By sensing the duration of the lighting period and the relative intensities of some low intensity wavelengths, many species time their growth phases in concert with the seasons.

Plant species are conveniently categorized as day neutral (unresponsive), short day (for flowering), and long day (for flowering). In practice, the photoperiodic response is rather more complicated than these three simple groupings imply, and it is often influenced by other coincidental factors such as physiological maturity, temperature, nutrient availability, and moisture.

The photoperiod response in plants is triggered by changes in a protein receptor pigment called phytochrome. The phytochrome molecule can exist in two forms, one that absorbs red light, and another that absorbs far-red light. In the red light phase (r form) the absorption of red light converts it to the far-red form (f form).

Once in the far-red wavelength, far red light and metabolic conversion will convert it back to the r form, as will metabolic conversion. The wavelength of light therefore, allows phytochrome to act as a chemical switch. Phytochrome shifts back and forth between states, depending upon which light wavelength predominates (there is more red light during the daytime, and more farred light at dusk, dawn, and during the night period). This allows plants to ‘sense’ whether it is night or day, and to measure the length of the night period in order to time seasonal processes such as flowering.

Similarly, black cloth applications to simulate short days must be sufficient to screen out almost all of the red light (usually below 1 foot-candle). 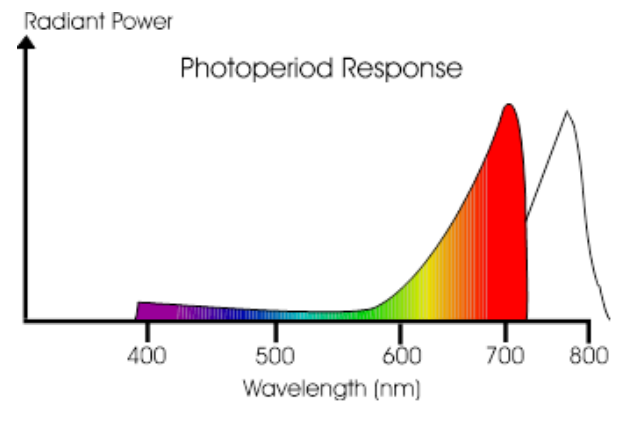 In addition to the phytochrome dependent photoperiod response, many plants use specific wavelengths and light intensities to properly orient their growth patterns. Photomorphogenesis describes the effect of light upon plant habit and shape, and phototropism describes the ability of plants to orient their parts towards or away from light sources.

Recently, the effects of blue wavelengths have been studied in relation to these responses, since the standard high pressure sodium lamps used in greenhouses and growth rooms are somewhat deficient in blue light.

Want to get in touch with Argus? They can be reached via the following methods: