Treatise on Decarboxylation – Part One

In this contributor article, Marco Troiani of Digamma Consulting discusses the chemistry of cannabinoid acids, and the chemical process behind smoking and decarboxylation of cannabis.

Treatise on the Decarboxylation of Cannabinoids

Decarboxylation is a process in which carbon dioxide (CO2) leaves a stable molecule and floats off as a gas. Atoms in a molecule can be thought of like billiard balls, with each one having a size, weight, and exact position. As these atoms float away, the substance left behind will become lighter, like a dry towel being lighter than that same towel soaking wet. The idea is that as the CO2 leaves, the weight left behind is reduced. 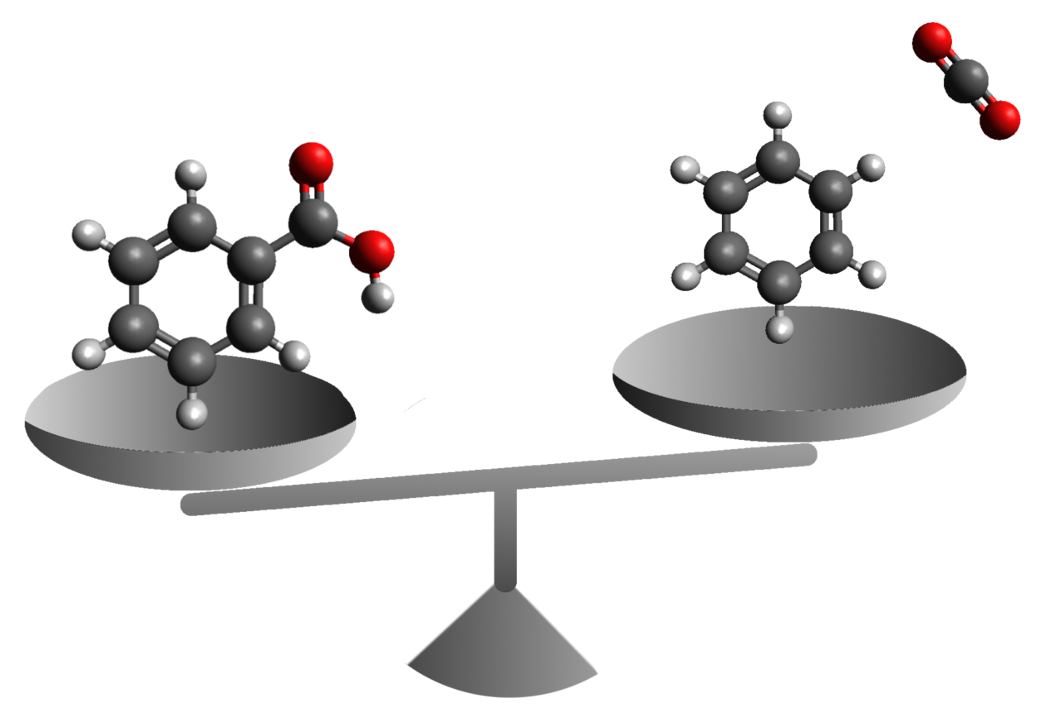 As we can see in the illustration, the weight of the CO2 is lost as it floats away, leaving less mass and weight of substance than before decarboxylation occurred. Decarboxylation typically occurs when a substance is heated, but it can also be caused by exposure to certain frequencies of light, and catalyzed by certain substances like molecular oxygen in the air.

How does decarboxylation effect cannabinoids?

This knowledge is important for people decarboxylating cannabinoids by themselves, particularly producers of cannabis-infused edible products and hash oil producers that wish to sell decarboxylated oil. This is also important for brokers of raw cannabis products such as cured cannabis flower, who must either report the value of the cannabinoid acid directly observed by the testing lab, use the theoretical conversion, or display both.

The labeling issue with raw flower is not as easy as it seems at first glance. Let’s consider a typical example of THC-dominant cannabis. A lab will test the flower and find 26% THCA and 3% THC. 3% THC occurs because a small amount of the cannabinoid acids are decarboxylated by air and sun before harvesting and curing. The smaller amount of THC observed directly by the lab typically indicates that the cultivator has submitted fresh cannabis that has been protected from light and exposure. A higher THC content indicates that the cannabis flower has undergone more exposure and is therefore not as fresh as flower with a low THC content.

Now a broker or dispensary has a choice to advertise certain numbers: 26% and 3% from lab testing, a theoretically calculated number of 25.8% THC, or both sets of numbers. Providing the patient with both sets of numbers gives them the greatest amount of information, while also reducing liability on the cannabis business involved in label making. Sample calculations are provided below:

It is important to note that the mass loss is not a conversion rate. Mass loss assumes that all of a substance will decarboxylate and calculates how the mass will change. An accurate answer must account for how much of the cannabinoid will decarboxylate. Studies indicate that 30-70% of cannabinoids undergo decarboxylation under standard smoking conditions. This is why our calculations at Digamma are only a theoretical maximum, and are not a result with the same standing as those directly observed in the plant. This is also why it can be very important to label your theoretical calculations as such, and provide all original values provided by lab results, as a means of reducing liability upon your business.

Author's Note: Common naming systems used in California, Colorado, Massachusetts, Nevada, Oregon, and Washington for the maximum calculated THC are “total THC” “potential THC” and “maximum THC”, though one naming scheme has not emerged as the industry standard yet.