Ben Amirault of Medicinal Genomics looks into the research surrounding powdery mildew that affects cannabis and answers the question of whether Powdery Mildew is a systemic pest or not. This Contributors article has been reproduced with permission from Medicinal Genomics. The original article can be found here.

Cannabis growers are divided when it comes to powdery mildew, one of the plant’s most notorious pathogens. In one camp, there are those who believe powdery mildew is a systemic pathogen that permeates via the plant’s vascular system. Others believe is it superficial pest that spreads across the plant’s surface.

As it turns out, there is a good reason for the debate. Based on the available literature and the tests we have conducted at Medicinal Genomics, it’s not clear whether powdery mildew is systemic. The science is not settled. But here is what we know so far:

Powdery Mildew that infects Cannabis is a novel organism

We genetically sequenced infected cannabis plants from the United States and Canada and found that the DNA didn’t match any known powdery mildew sequences. Further complicating things is the possibility that there could be more than one powdery mildew species infecting cannabis. We need to collect more samples from Europe and Asia in order to determine that.

There has been no published research into how this novel powdery mildew organism infects the cannabis plant. For now, the best we can do is look to studies on how other powdery mildew species infect other plants for clues. However, until similar studies are conducted on cannabis, we can’t be sure exactly how the pathogen behaves.

Powdery mildew can create an invisible network before spores are visible

Powdery mildew is an obligate biotroph, which is a fancy way of saying it cannot survive without taking nutrients from a host. A 2012 study showed how the Golovinomyces orontii species of powdery mildew (affects Arabidopsis thaliana) does just that. After dyeing an infected leaf, researchers observed that spores penetrated the leaf and the cell wall with a taproot called a haustorium, which serves as its primary feeding mechanism. The pathogen then forms secondary taproots into neighboring cells, creating a mycelium network over a period of several days before producing the tell-tale white powder. 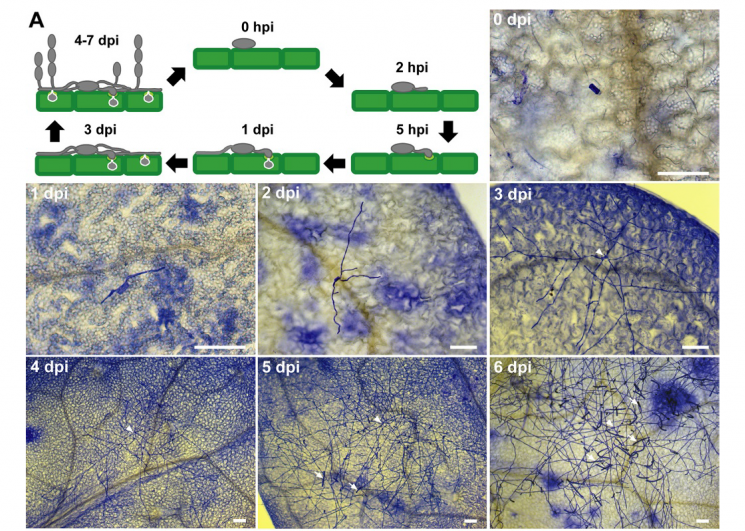 Editor’s Note: The above picture demonstrates the formation of a haustorium and secondary taproots.

It’s important to note that Golovinomyces orontii is not the same organism that infects cannabis. G. orontii infects Arabidopsis thaliana. However, we have designed a test that can detect the unique DNA signature of the powdery mildew species that infects cannabis from a 4mm leaf punch. In fact, our youPCR Powdery Mildew detection assay can detect powdery mildew DNA from cannabis leaves that show no visual signs. This means that we are detecting the DNA from the mycelium network that the pathogen creates prior to sporulation. This early detection can be useful to growers who can remove and quarantine infected plants so they do not further infect the grow room.

Powdery Mildew can be detected elsewhere in an infected plant

If powdery mildew penetrates the plant, the next question is whether it gets into the plant’s vasculature and infects other parts of the plant. There is no published literature that supports that theory, and it is likely the mycelium network is made externally. 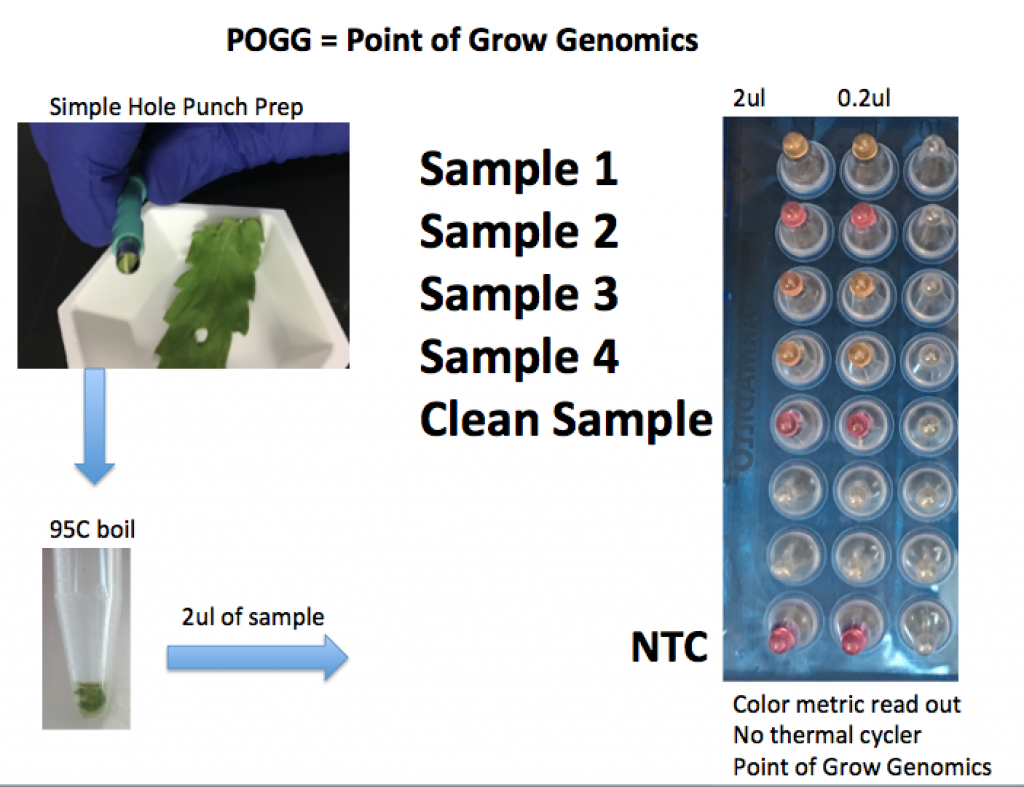 However, we collected four samples from visually clean leaves off of a plant that had visual powdery mildew elsewhere on the plant. Of those four samples, three tested positive for powdery mildew. This does not prove the theory that PM can travel through the plant’s vascular system. It is possible that the other parts of the plant were infected by separate infection events. It may also be that some powdery mildew DNA gets into the plant’s vasculature when the haustorium penetrates the plant. In any case, it is a topic that warrants further study.

Cannabis can be bred for powdery mildew resistance

Powdery mildew does not affect all cannabis strains and varieties equally. Some varieties of cannabis are resistant, while others are very susceptible to the pathogen. We also believe that powdery mildew resistance is not binary, but additive. In hops, for example, we have seen that there are lineages that are partially resistant. 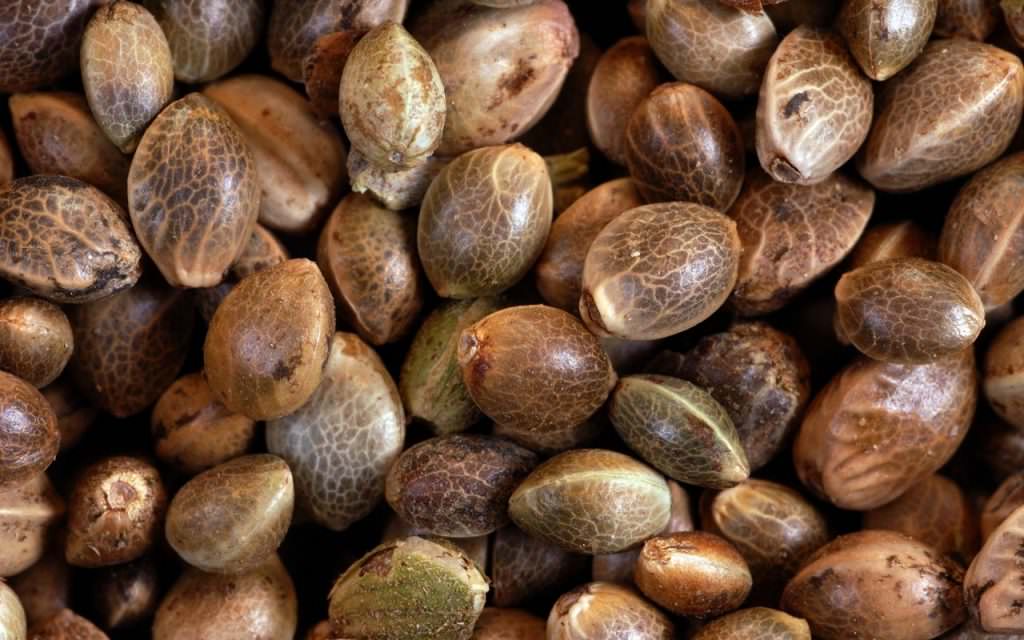 In any case, powdery mildew resistance is a trait that can be selected for. Using early detection technology, such as the youPCR Powdery Mildew assay, growers can screen plants for infection before visual signs are present. By continuing to screen for powdery mildew infections, and selecting against plants that test positive, breeders can enrich their resistance.

As you can see, there is still much to be learned about powdery mildew on cannabis. As with most plant pathogens, the best defense is prevention. This can be done with strict environmental controls, periodic screenings of grow rooms, and screening of incoming clones. The latter two can be done using the youPCR Point-of-Grow Powdery Mildew assay.

Ben is the Marketing Manager at Medicinal Genomics (MGC) and enjoys the challenge of trying to simplify the amazing science performed in the MGC lab into content for the layman. Ben also maintains Kannapedia.net and helps to organize and execute MGCs annual CannMed Conference. Prior to joining MGC Ben worked as an writer and editor. He earned his journalism degree from the University of New Hampshire.