Growers Network prefers all cannabis to be clean and pesticide-free. However, there may be occasions when fungicidal use is warranted. In case of those events, Mike Steffes of Quest Hydro has provided us with some simple guidelines on how best to avoid Powdery Mildew and use fungicides in the event of an infestation.

This article has been reposted with permission from Quest Hydro. The original article can be found here.

Powdery mildew is a common fungal disease of angiosperms (basically, any plant but conifers). The growing fungus looks grayish white and powdery. 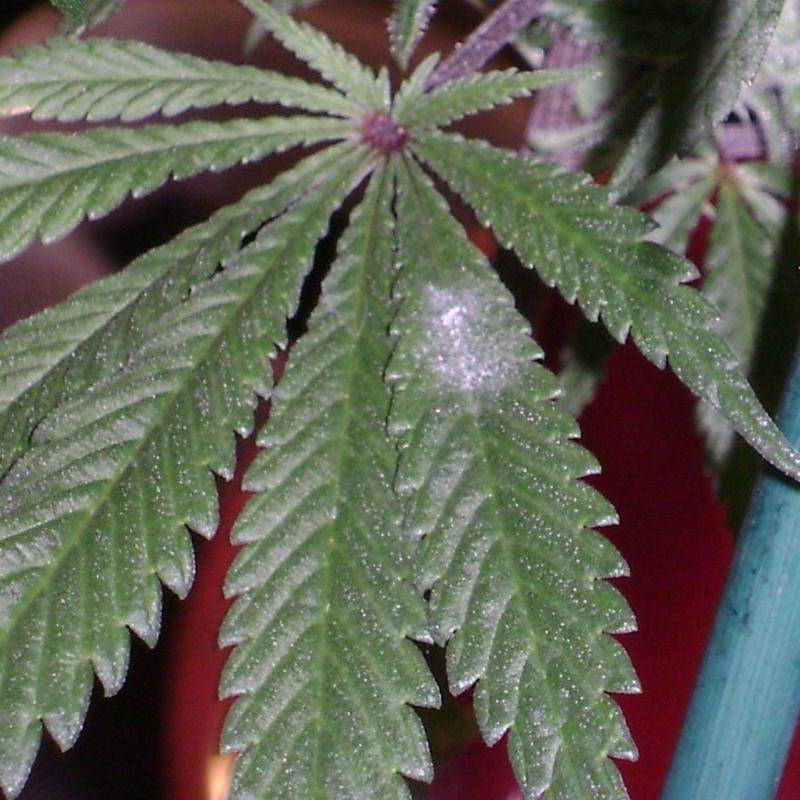 Powdery mildew is an infection from one of the many fungal species of the family Erysiphaceae (ee-rhy-suh-facie). Powdery mildews generally live externally from their hosts, and not inside of them. In other words, they are ectoparasites, not endoparasites. This means that powdery mildew is not a systemic infection. It does not grow into parts of the plant or propagate internally throughout the plant.

Furthermore, powdery mildews’ parasitic process requires host cells to remain alive. They are what scientists call obligate biotrophic parasites. Biotrophic pathogens usually cause disease on only a relatively small group of host plants. This is because of the different genetics and molecular processes/structures required for wider ranging host-pathogen interactions.

The first symptoms of a powdery mildew infection are dusty gray or white spots on either side of the leaves. If left untreated, the growing fungus will produce spores and rapidly spread to other leaves, stems, and flowers. While powdery mildew doesn’t typically kill the host plant, it can cause early senescence and stunt the plant’s growth and development. Some plants may show local necrosis when badly infected.

The fungus can be transmitted by pests such as aphids, or via touch, tools, clothing, shoes, and even by airflow through previously contaminated spaces. These transmission methods are called “transmission vectors”, or sometimes simply referred to as vectors.

Relative humidity plays an essential role in the control or spread of mold. Molds and fungi particularly like dry leaf surfaces and humid environments. For the best inherent protection during growth phase, relative humidity (RH) should be kept between 40% and 55%. Flowering requires drier conditions, with humidity levels between 25-45% RH.

Editor’s Note: Dewpoint is also a very useful tool for measuring the danger posed by fungi. Ideally you want to avoid any liquid water in the environment. Check out this dewpoint calculator to see how the dewpoint affects mold risk.

One very critical thing to monitor is the night time RH level. The night time RH often spikes and can lead to condensation. Wide RH swings are conducive to powdery mildew infection.

Additionally, crowding your plants can produce pockets of stagnant, high humidity air, so called “microclimates,” so give your girls some room. It’s a good idea to keep the lower fan leaves trimmed to prevent these microclimates.

Dedicated shoes, shoe covers, or a boot bath, and hand washing (alcohol based hand sanitizers are good) before entering the grow area are your first line of defense. It’s also a good idea to not wear your outdoor clothes into your grow.

Clean and sanitize tools and equipment that come into contact with multiple plants. Immersing tools for a couple minutes in a sanitizing solution prevents cross contamination with healthy plants. A pint of household bleach mixed with a gallon with tap water will work well. Use this sanitizer solution to spray pots, plant trays, water tanks & pipes, and all other hard surfaces of equipment. However, wetting porous surfaces with bleach doesn’t work. Minimize porous surfaces in your grow rooms.

Monitor and inspect for plant infections on a regular basis, ideally daily. When a new infection is noticed, infected plant parts should be removed when possible. Place them directly into a plastic bag without waving them around. This is your warning alarm to adjust your treatment regimen quickly. More on this in the Treatment section.

Be sure to change your air filters between grows. Bag the filters as you pull them out and remove them from the premises in a closed trash container. Don’t go walking around with a used filter full of … yeuch.

Fungicides are most often grouped by “mode of action” (MOA). They are split into approximately 42 groups that are assigned by the Fungicide Resistance Action Committee (FRAC) based on their modes of action. The two mode-of-action groups most commonly mentioned are Group 3, the demethylation inhibitors (DMI), and Group 11, the quinone outside inhibitors (QoI). Fungicides kill by damaging fungal cell membranes, inactivating critical enzymes or proteins, and/or interfering with key metabolic processes like fungal respiration:

The best method to prevent or reduce a fungal infection is a multi-pronged approach where you rotate through a few various systemic and contact fungicides. The idea is to use methods that possess different modes of action. Your combinations should aim to provide kill on contact, suppress spore production, and limit the development of resistance. We’ll discuss resistance more later, but suffice it to say that you do not want your own personal superfungus.

Note: When applying fungicides, remember to always test for phytotoxicity (toxic to plant growth) on a small area of the plant before use. Some amount of damage may be deemed tolerable when weighed against the alternative of powdery mildew.

Fungicides designed to attack one single protein or enzyme molecule are said to be “single site acting”. Some examples of this are the triazoles (Group 3), which focus on the demethylase enzyme; the strobilurins (Group 11), which target the succinate dehydrogenase enzyme; and the carboxamides (Group 7) that go after the ubiquinol oxidase enzyme.

Another way to describe a fungicide’s mode of action is to say it is used as a protectant, as a curative, or as an eradicant:

Resistance management is a critical consideration during treatment decision-making. There are two types of resistance: qualitative and quantitative resistance. Qualitative describes an either/or situation: Either the fungus is resistant, or it is not. Either it has, or does not have, the quality known as resistance to the treatment. Quantitative, on the other hand, brings percentage into the picture: Some percentage of the fungi may be resistant to treatment. Some quantity of the fungi is resistant.

If you’ve had recent PM outbreaks, it’s not a bad idea to use fungicides protectively before powdery mildew becomes a problem again. Always apply fungicides at their labeled rates and use as many fungicide modes-of-action as possible in your management program.

Want to get in touch with Quest Hydro? They can be reached via the following methods:

This educational document was written, compiled, and adapted by Mike Steffes of Quest Dehumidifiers.