Considerations for Horticultural Lighting Beyond Photosynthesis

We have known that light is responsible for driving plant growth via photosynthesis for many years; however, the influence of light on plant development has only become well understood in the last century. The color of light is not only an important variable for photosynthesis, but also acts as a packet of information to signal light mediated developmental responses in plants, such as: seed germination, stem elongation, and flowering. The term used to describe these responses in plants is photomorphogenesis. Plant morphology is extremely important in controlled environment agriculture where vertical or horizontal growing space may be limited. Depending on the plant architecture you desire, there may be other aspects of horticulture lighting systems to consider beyond providing a source of photosynthetic light.

Photosynthetically active radiation (400 – 700 nm) is mainly used for photosynthesis, however, plants can sense wavelengths ranging all the way from UV-C (260 nm) to far-red (730 nm) using separate photoreceptors that are not utilized for photosynthesis. These photoreceptors direct an adaptive response in plants under changing environmental conditions to regulate key stages of plant development which depend strongly on the spectrum of light, and in some cases timing, periodicity, and the overall exposure. The latter is usually called fluence, and is measured in micromoles of photons per square meter of surface. There are very low, low, and high fluence responses, with the corresponding sufficient light levels ranging from those of star light (for very low light levels) to direct sunlight (for high light levels). The purpose of this article is to describe photomorphogenic responses in plants. 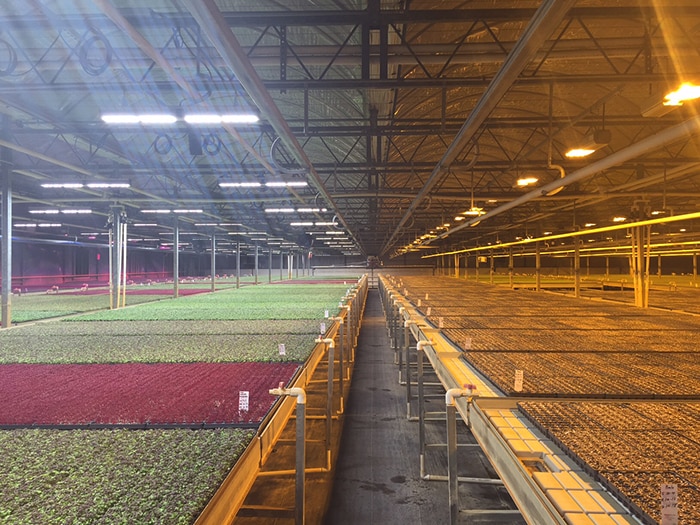 There are long-day plants (which require short nights to flower), short-day plants (requiring long nights), and day-neutral plants which have no specific requirement for the photoperiod. This dependence on the photoperiod is referred to as photoperiodism. However, it is the length of the dark period (scotoperiod) that regulates flowering of photoperiodic plant species. In the absence of light, Pfr slowly converts to Pr, and as the scotoperiod increases, so does the relative amount of Pr. Long day plants (which have a short scotoperiod) will not flower if Pfr converts to Pr during the scotoperiod, while short day plants (which have a long scotoperiod) will only flower if Pfr converts to Pr during the scotoperiod. Photoperiodic phytochrome responses occur in the low fluence range (as low as 1 µmol/m2), so it can only take a short flash of R light to during a scotoperiod to revert Pr back to Pfr. For example, flowering of a long-day plant may be induced by night interruption, using a series of short flashes of red light with photon flux levels as low as a few µmoles/m2s. Conversely, short-day plants may be induced to flower by a single flash with pure FR light at the very beginning of the dark photoperiod, after turning off all other lights. This effectively adds a couple of hours to the dark period for the purpose of flowering, which can be used to extend the light period for growth and optimize plant yields as a result. Switching the above methods for plants with opposite photoperiod requirements would delay flowering, which may also be desired sometimes (e.g. to provide the best quality flowers on schedule for certain holidays). 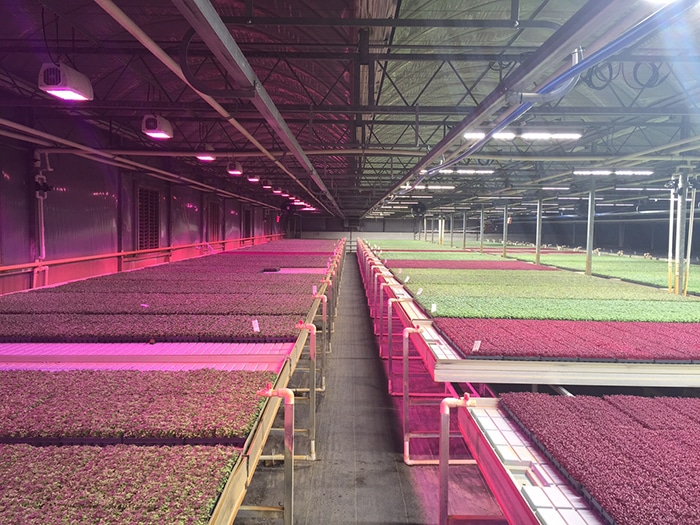 VYPRx PLUS with PhysioSpec Greenhouse compared to a typical “purple” LED grow light.

Another important R and FR photomorphogenic response important to horticultural lighting systems is called the shade avoidance response. Far-red light is transmitted through leaf tissue more so than red light, which causes an enrichment of far-red light, relative to red light, for plants grown under canopies. When a low R:FR ratio is perceived by phytochrome pigments, a shade avoidance response is activated to elongate hypocotyls or stems in an attempt to out-compete neighboring plants. This is very important when it comes to the spectral light quality of horticultural lighting systems. Photoperiodic lights that provide a low R:FR ratio to promote flowing may also induce a shade avoidance response in plants, which may result in an undesirable growth habit, especially if a compact growth habit is preferred.

Want to get in touch with Fluence? They can be reached via the following methods:

Josh Gerovac is a horticulture scientist at Fluence Bioengineering. He has spent the last decade working in controlled environment agriculture, ranging from growth chambers to greenhouses. His research and practice is focused on the influence of light intensity and spectral light quality on growth, morphology, and nutrient content of edible, ornamental, and medicinal crop production. He has a Bachelor of Science in Horticulture Production and Marketing, and a Master of Science in Horticulture, both from Purdue University.