Chelation – What is it? This article has been republished with permission from Elite Garden Wholesale. The original article can be found here.

The Art of a Good Chelate

Hi Everyone! Dr. NPK here, at it yet again. Today’s blog topic is about chelation: a very chemistry-ish topic! Chelation is a very important chemical principle that is important in a variety of industries, including cleaners, water purification, and oil & gas. But, most importantly, chelation is important in growing cannabis.

The Definition of Chelation

Chelation (pronounced key-lay-shun) is defined as: “the process of chelating” … thanks for the useful definition, Merriam-Webster.

Anyway, the act of chelation is a type of bonding between a metal ion and a ligand (A ligand is a type of molecule that has an affinity for the metal ion). An analogy of this would be to imagine your significant other in a crowded room. If he/she was asked to give ONE person a hug in the room, hopefully they’d hug you. That’s how ligand/chelants work. These chelating agents have different affinities based on their size and ion type. For example, calcium has certain attractions to chelants that iron does not. The generic equation for a chelant is this: M + L = ML (M = metal, L = ligand). Once the ligand binds to the metal ion, it is usually chemically unfavorable for the ligand to separate from the metal. This means the reaction is not easily reversed. Once you make “ML”, it’s really hard to split them up. Imagine the chelating agent “biting” the metal and holding on. 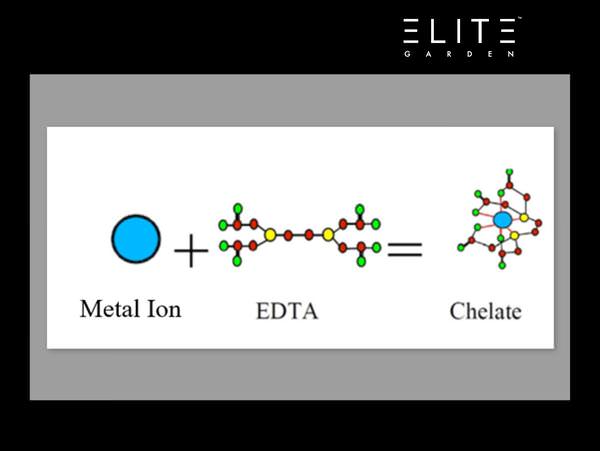 The Chelation Connection to Cannabis

It’s cool that chelation is an important principle in a lot of industries, but how is it relevant to cannabis?

If you recall, I mentioned that chelation is important for metal ions. Macronutrients like potassium, sulfur, and nitrogen do not require chelation to be taken up by the plant. Cannabis plants need a variety of nutrients, many of which are metal ions. These include most of the micronutrients found in Elite Base Nutrient A, like iron (Fe), manganese (Mn), zinc (Zn), and copper (Cu).

Unfortunately, these highly charged species get “caught up” by other ions present in the tank or soil. The scientific term for this is “double displacement reaction.” These positively charged metals mentioned above react with the negative species found in your tank (such as sulfate, or phosphate), and create an insoluble metal mixture. An insoluble mixture is not taken up as easily by the plant, leading to a micronutrient deficiency!

In the case of iron, a heavily oxygenated environment causes the iron to be oxidized into rust (Ferric Oxide), making it water insoluble and unusable to plants. By using a chelated metal, you ensure that the chemical identity of a micronutrient stays the same (i.e., does not interact with the negative species found in your tank), ensuring that the micronutrient is delivered in plant-usable form.

EDTA: The Best Bodyguard of Them All

There are a variety of chelant chemistries available; but one stands head and shoulders among the rest. I am referring to EDTA (ethylenediaminetetraacetic acid). EDTA is an attractive chelating agent because it is cost effective and has broad-pH stability. When I say it’s pH-stable, that means that the chelated complex of the metal+chelant does not separate at a specified pH. EDTA is the chelant of choice in hydroponics for most applications; the one exception is really, really, hard water that’s slightly alkaline (pH >7.0). If your water is this hard (my condolences), consider adjusting the water’s pH prior hitting it with nutrients. If you are seeing a super red “blood-like” color in your nutrient mix, it is likely oxidized iron that is not plant-usable. Otherwise, if you are running your res at a normal pH range, EDTA should be good to go. There are some naysayers that say EDTA is harmful; I disagree with those people. EDTA is a common chelating agent in the pharmaceutical industry (Wax, P. J. Med. Toxicol. 2013, 9, 303–307) and its metabolism in chickens (Darwish, N. M.; Kratzer, J. Nutr. 1965, 86, 187–192) and cells (Kluner, T.; et al. Applied Microbiology and Biotechnology 1998, 49, 194–201) has been studied. I can buy a bottle of calcium EDTA from any grocery store, which feels pretty safe to me. 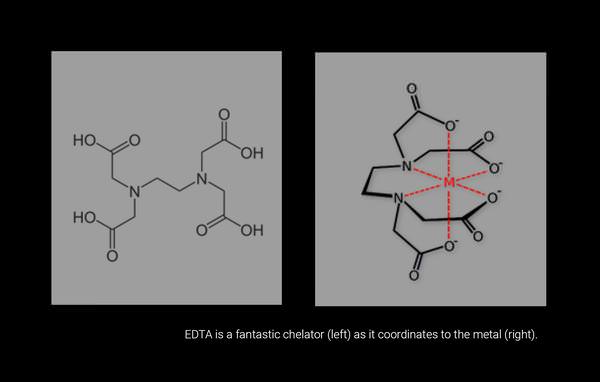 Chelation is an important chemical principle in hydroponic growing. Fortunately, for most growers EDTA is the best solution for your chelated micros due to its availability and general stability. If your water is outside the normal pH range for EDTA, consider pre-treating your water with pH up/down to get to a normal range prior to treating with nutrients.

Want to get in touch with Elite Garden Wholesale? They can be reached via the following methods:

Dr. NPK has been in the chemical formulating business for over 9 years. With a Bachelors in chemistry from UCLA and a Ph.D. in chemistry from UC Irvine, he has always had a passion for chemical formulation. Over the past several years, his focus has narrowed towards the research and development of products that are optimized for cannabis. He assisted in the development of the Elite Nutrient line and takes great pride in the products he created and uses himself. He has made it his mission to cut through all the pseudoscience available on the web and to educate readers on the science behind growing top-shelf bud.