In this article, Savino Sguera, Marco Troiani, and Marc Whitlow of Digamma Consulting examine likely trade routes and hubs that will appear in California under Proposition 64.

Although cannabis has been legalized for adults over 21 since November 9th, 2016, the allowance of recreational cannabis for sale and taxation began January 1st, 2018.2,3 As 2018 unfolds, many of the new regulations governing the recreational cannabis market are still being debated and enforcement is being rolled out in phases. Cannabis laboratories have increased standards, requirements, certifications, and analyses, but they are gradually being phased-in over the course of 2018, with full toxic heavy metal screening not being required until December 31st.4

As California transitions, another large change is the addition of distributors. These distributors are often responsible for the transportation,5 storage,6 testing,7 and labeling8 of cannabis and cannabis products. In the old medical cannabis industry, like that in California before 2018, or currently in use in Colorado, Nevada, Oregon, Washington, and other states, these businesses had to interact with each other directly, with the testing labs often acting as an intermediary between production and distribution because of the laws requiring certificates of analysis on products before sale. 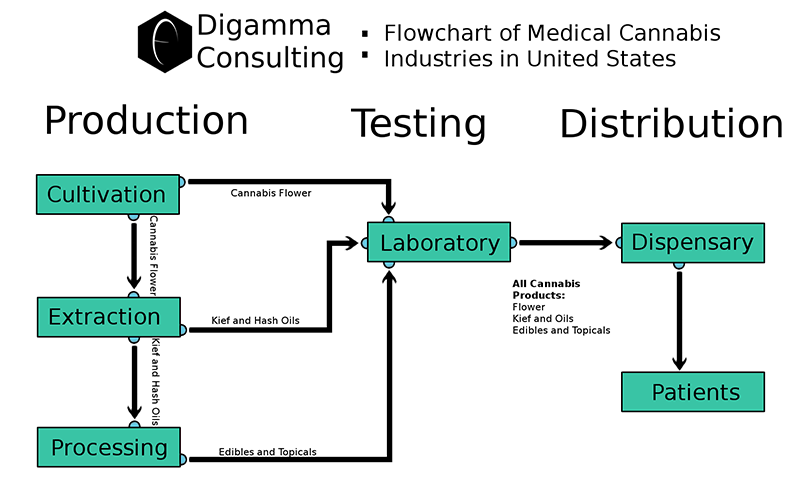 Illustration 1: A diagram illustrating the flow of cannabis and derivative products through various licensed cannabis business

In the new system in California, all production, testing, and sales will be linked through distributors. This will allow much of the extraction, processing, and lab testing to be centered around distributor activity both economically and physically. 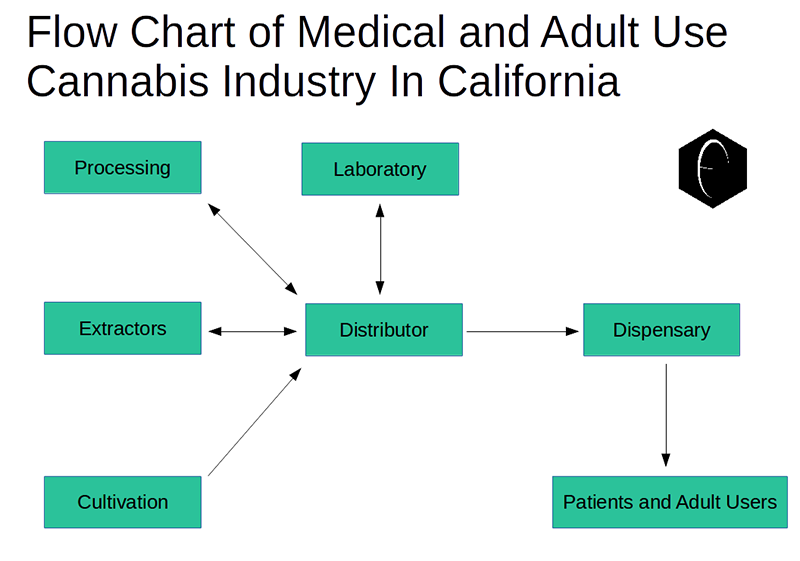 Illustration 2: A diagram illustrating the flow of cannabis and derivative products through the licensed businesses as modeled in the California cannabis regulations

A distributor based system is beneficial because extraction, processing, and testing are all technically laboratory functions that have higher overhead costs than cultivation facilities and dispensaries. It is for this reason that these businesses with thinner margins will cluster around distribution hubs or centers where cannabis and money are flowing in counter-current directions.

Distributors are necessary not only for economic viability of certain derivative businesses, but are also necessary to minimize administrative costs for state tax collectors. Because the distributors represent large numbers of cultivators and dispensaries, it will be much more cost effective for the State of California to collect taxes and perform tracking and enforcement operations through these distributors. 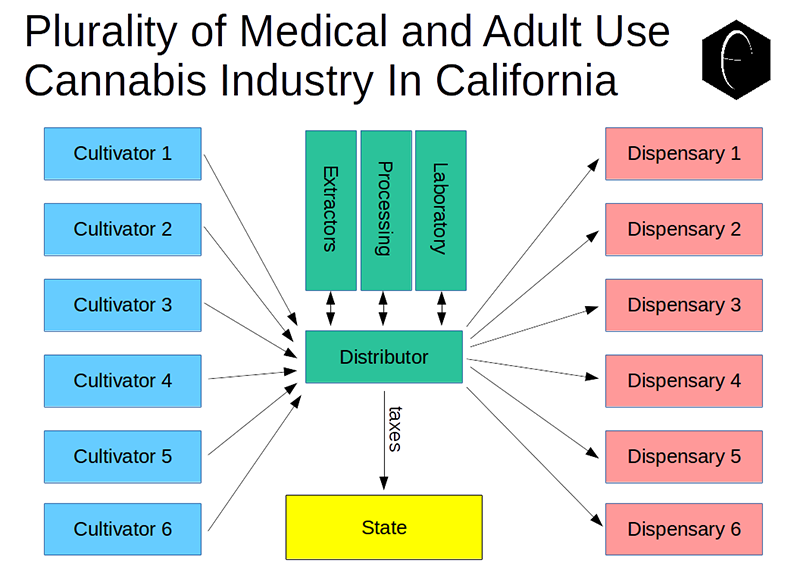 Illustration 3: A diagram showing the distributor model with an illustrated plurality of cultivators and dispensaries. The green cluster of businesses around distributors reduces overhead and simplifies tax collection.

To help aid those seeking to predict the nature of the new regulated cannabis industry in California, Digamma Consulting has performed a small preliminary study into the trade routes of the existing cannabis market. We have analyzed cannabis importing and exporting regions in the state and have found four probable hubs and clusters around which cannabis distributors will likely establish themselves.

Once the cannabis distributors set up a network connecting cultivators to dispensaries, their locations will act as an economic focal point for the flow of money and cannabis product. Auxiliary sectors of the industry, such as testing labs, extraction labs, production and formulation facilities, and others will establish themselves in the vicinity of these distributor locations to simplify the operation of their business and maximize their profitability. Cannabis being produced in a wide distribution of regions of origin could collect in distributor warehouses, where it could be extracted, processed, tested, appraised, and sold very efficiently and quickly.

The four predicted clusters are outlined below. See the map below illustrating trade routes and distributor hubs. 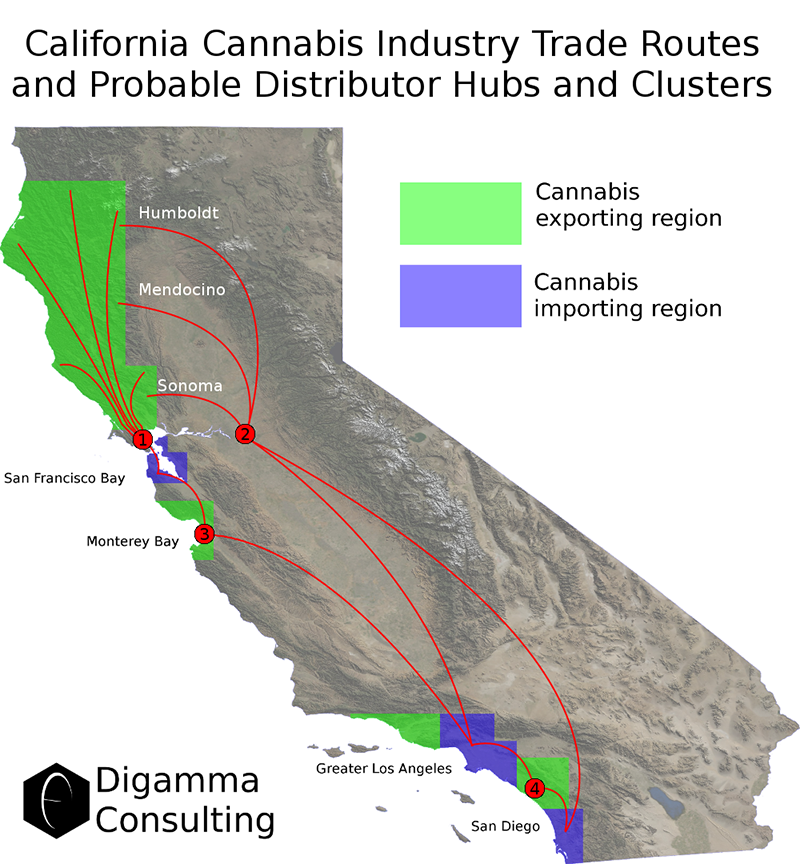 Digamma Consulting is a full-service laboratory and consulting firm for cannabis. Savino Sguera and Marco Troiani are leading partners for Digamma and have years of experience under their belts. Their market analyses and scientific insights have been well-received here at Growers Network.